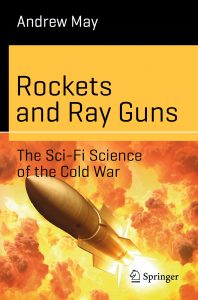 My second contribution to Springer’s Science and Fiction series is out now – Rockets and Ray Guns: The Sci-Fi Science of the Cold War. It’s in a similar style to Pseudoscience and Science Fiction, and even includes some pseudoscience of its own (e.g. UFOs, ESP and mind control) as well as the more obvious topics such as nuclear weapons, guided missiles and space warfare.

The Cold War saw scientists in East and West racing to create amazing new technologies, the like of which the world had never seen. Yet not everyone was taken by surprise. From super-powerful atomic weapons to rockets and space travel, readers of science fiction had seen it all before.

Sometimes reality lived up to the SF vision, at other times it didn’t. The hydrogen bomb was as terrifyingly destructive as anything in fiction, while real-world lasers didn’t come close to the promise of the classic SF ray gun. Nevertheless, when the scientific Cold War culminated in the Strategic Defence Initiative of the 1980s, it was so science-fictional in its aspirations that the media dubbed it “Star Wars”.

This entertaining account, offering a plethora of little known facts and insights from previously classified military projects, shows how the real-world science of the Cold War followed in the footsteps of SF – and how the two together changed our perception of both science and scientists, and paved the way to the world we live in today.

The book has already received a couple of nice reviews:

Needless to say, Rockets and Ray Guns is available from all good booksellers, including Amazon.com and Amazon UK.

I just realized that it’s been four months since I last posted an update on this blog. I’ve been too busy! Anyway, my Cold War book now has a working title – Rockets and Ray Guns: The Sci-Fi Science of the Cold War. I’m about two-thirds of the way through writing it – hopefully it should be out some time around the middle of 2018.

Basically the book is a follow-on to Pseudoscience and Science Fiction, which was published last year. While the first book looked at the way SF anticipated and cross-fertilized with various well-known tropes of the pseudoscience industry, the new one will do the same for the real (or in some cases, allegedly “real”) science of the Cold War.

The picture above gives a quick taster of the kind of thing I mean. The illustration on the left comes from a short story by John W. Campbell called “When the Atoms Failed”, from the January 1930 issue of Amazing Stories. The picture on the right is an artist’s conception of a space-based electromagnetic railgun, dating from July 1984. This was a real-world proposal for an anti-ballistic–missile defence system, using technology that had already been demonstrated in the laboratory. 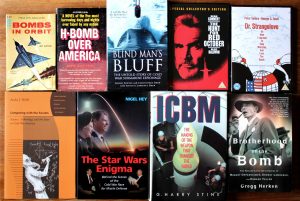 Having thoroughly enjoyed doing the research for my book on Pseudoscience and Science Fiction last year (see a selection of research materials here and here), and then The Telescopic Tourist’s Guide to the Moon earlier this year (see my Lunar Research blog post) I’ve been wondering what to do next. One idea that occurred to me is something about the Cold War … so I’ve been dutifully immersing myself in research on the subject, as you can see from the picture above.