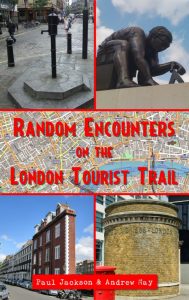 Just out – my second book in collaboration with Paul Jackson, following on from Weird Wessex a few years ago. Like its predecessor the new book is “a tourist guide to strange and unusual sights” – but this time they’re right in the centre of London.

There’s an Egyptian Goddess in Mayfair and Karl Marx in Soho, a tiny police station in Trafalgar Square and an 18-inch-wide alley in Covent Garden (careful you don’t get stuck!). Alongside the iconic landmarks that the regular guidebooks tell you about, central London has an impressive assortment of quirky and unusual sights, from art installations in the form of human body parts to hundred-year-old advertising signs and a forgotten tube station. This book gives you a guided tour of all these sights and more – without straying far from the places you were going to see anyway, like Big Ben and Buckingham Palace, the Tower of London and St Paul’s Cathedral, the museums of South Kensington and the entertainment hotspots of the West End.

Like Weird Wessex, Random Encounters on the London Tourist Trail is packed with full-colour photographs. With improved paper and print quality, the colours really stand out in this one too. You can get it from Amazon UK or any other Amazon store. There’s also a Kindle version (although that won’t give you colour pictures if you use an ordinary monochrome Kindle reader).